GOOD FOR FARMERS. GOOD FOR YOU.

Dairy Farmers Steve Reynolds and Sallie Jones (pictured above) are the loveliest people and I have included their respective farming stories below. Please do read it – its a fantastic story. They source from their own Gippsland Jersey Cows (the tastiest and best!) and their milk is bottled in nearby Keysborough..almost in Bayside! It is available on your list to order now. Enjoy!

In 1895, Oscar Ronald’s settled a small parcel of land in Jindivick, Gippsland. His dairy farm grew, and has been in the family ever since. His great, great grandson Steve purchased the farm and followed in the family tradition. He now oversees the milking of over 450 jersey cows every day.

Sallie Jones was born and raised on a dairy farm in Lakes Entrance, in East Gippsland. She spent her childhood in the farm’s milking sheds with her father, and later in the family’s ice cream shop, working diligently to support her father’s enterprise.

OUT OF CRISIS, AN OPPORTUNITY

In November 2015, a motorbike accident left Steve nursing broken ribs, a broken collarbone, a broken shoulder blade, a punctured lung, and short-term memory loss. Three hospitals later, he returned to his farm in Jindivick. He was unable to milk cows for eight months, his arm and shoulder just too painful.

Then in April of the following year, tragedy struck when Sallie’s father passed away at his Lakes Entrance dairy farm. Around the same time, the dairy industry was rocked when the two major milk processors slashed the price they paid to farmers for their milk. This left a trail of debt and despair throughout Gippsland and elsewhere.

Both at a crossroad, but keen to honour their respective dairy farming backgrounds, Sallie and Steve came together as business partners, and started working on how to dairy farm sustainably, as well as support those dairy farmers who were struggling. Gippsland Jersey was born. Bypassing the large foreign owned milk plants allows Gippsland Jersey to ensure a fair price is paid to farmers, and gives consumers are clear choice when buying their milk. And by returning a portion of profits to the Gippsland farming community, Gippsland Jersey helps support the mental and emotional well-being of dairy families who may be struggling emotionally or financially.

Gippsland Jersey is different. Our milk comes with a promise: when you buy it, you are directly supporting Gippsland farmers.

This happens in two ways: 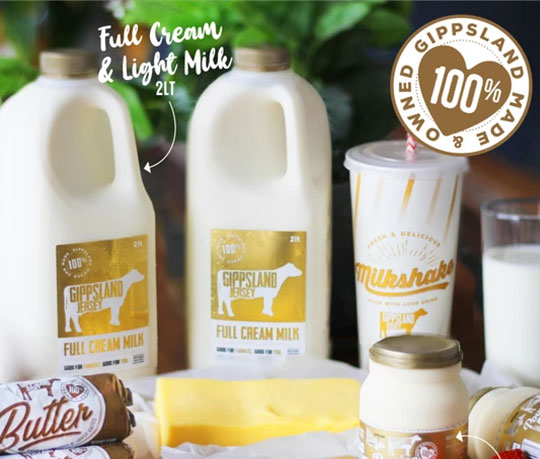 Know anyone
doing it tough?